Professional Wrestling is fake. The debate has been settled. Yes… I know they actually get hurt… They actually jump off turnbuckles and do their flying head kicks and occasionally break things…

I’m talking the story lines.. They are all so FAKE!!!! Vince McMahon’s daughter was NEVER kidnapped by aliens…. And while Hulk Hogan in real life might be a total D-Bag… His hero in-ring persona was only ever dictated by a group of writers paid to write soap operas for men.

However, there are some among us who still believe. This clip which highlights this large man’s love of wrestling is BEAUTIFUL in every way. And sometimes… Sometimes… I go to sleep at night watching it.

If there was a trophy for passionate believers of oily men grappling each other in short-shorts… This dude would win it!

Just like Monday Night Football, Sunday afternoon Golf Games, and whatever bowling-league night is called… In home-parties across America, Tuesday November 18th, was Opening Day for The Real Housewives of Beverly Hills, and the rosé flowed. 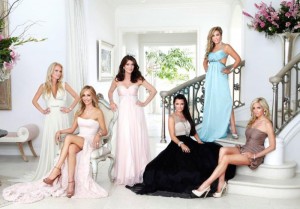 In solidarity with the rest of my American sisters, I sat down with a group of my best lady friends and we toasted off Lisa Vanderpump and her brood of money-loving body-obsessed celebritantes whose problems are real and are in NO WAY manufactured.

Come on, people… It’s in the title… The Real Housewives… THEY ARE REAL!!!!

Perhaps you remember my wild band of friends from a night out we had a few months ago with former child celebrity and hobbit, Sean Astin, where we sat down with him for wine and tapas at a quaint little restaurant in Calabasas.

…rolled out the red carpet for all of us, putting out all of our favorites: A fabulous cheese assortment, including a delicious apple-baked brie, lots of yummy tapas and deserts.

Molly had even added a touch detail with a Sangria/Champagne combo called the Saint Vanderpump, in honor of the Grand Dame, herself.

As we sat down amidst the delicacies… The air was ripe with excitment. Kyle Richards… The “good girl” of the Housewives was to have her annual White Party.. so named because everything at her party is the color white… And everyone at the party will be wearing white.

Though the girls and I were not wearing white for Molly’s Party… We did eat a lot of white cheese… And we did have white crackers to go with it.

Though the food may be different, and the entertainment various levels of strange… One thing that is always the same… At Kyle’s White Party, everyone might be wearing white, but none of them will be acting like saints. There will be drama and lots of it.

It is not uncommon at Kyle’s White Party, for people to get drunk, shout profanities, threaten lawsuits, and slap one another. This has been going on for ten years and every year, no one behaves.

For most hostesses, this would signal an end to The White Party. Once, some kids came to blows over a pinata at one of my Birthday parties growing up. After that, we had no more pinatas. Kyle Richards would laugh in our faces and call my mother a wimp. Kyle Richards WILL have a White Party, and if someone dies there, that’s just how it goes.

Such as Common Core Homework, which for some of the women at our party, has really amped up since the kids entered the fourth grade…

But those are all trifling matters compared to the real problems the Real Housewives were having… Because when Brandi Glanville found out Adrienne Maloof had shown up at The White Party without any kind of notice… Boy, was she pissed.

A problem that, by-the-way, has nearly brought her to tears on a number of occasions, as we can all agree that never in our wildest mommy fantasies… did we EVER envision how much poop would be involved, the sleepless nights and rashes it might cause, and the handling and dissecting of it.

Which is a good thing… Because just as I was taking another sip… So were the Real Housewives… And it was in that moment that things really got dicey!!

Real Housewife… Brandi Glanville had about enough of Adrienne Maloof’s presence at The White Party… And she did the thing that EVERYONE does at Kyle’s White Party before a showdown… She pulled Adrienne aside to “have a word alone” with her… LOOK OUT!!!! Drinks are about to fly!!!

As Brandi and Adrienne began their on-screen confrontation…

One of the ladies at our party confessed that a woman at her work had gone home with what she called a “menstrual blow out,” which was a story so bizarre and disgusting I wouldn’t believe it, if I didn’t personally know the woman relating the story.

It was at the height of the story of the terrible blowout that Real Housewife Brandi left The White Party in a huff… And Real Housewife Adrienne left not long behind her… Once again, Poor Kyle Richards invested thousands of dollars in her cherished White Party only to see it dissolve to drama and petty gossip.

Poor Kyle. Her White Party has been sucking for years.

I am glad to say that at Molly’s party… No one threatened a lawsuit… No one showed up with a man less than half our ages (though it wouldn’t have been a big deal if that happened)… And we all finished the evening without a good slap, punch, or drink poured on our heads.

Every time the intensity heats up for those Real Housewives… One of us will always say… “Do you think this is staged? Do people really act like that?”

Well… Does it matter? Was Hulk Hogan ever really enraged enough to break a chair over Andre the Giant’s head? Is it really worth debating? Just pull up a chair and enjoy it.